These delicious Keto Philly Cheesesteak Stuffed Peppers are an easy keto dinner recipe that your whole family will love.  They have all the flavors of a traditional Philly cheesesteak stuffed into a delicious bell pepper.  And, because we’re keeping this recipe low-carb, this is a recipe for stuffed peppers without rice. 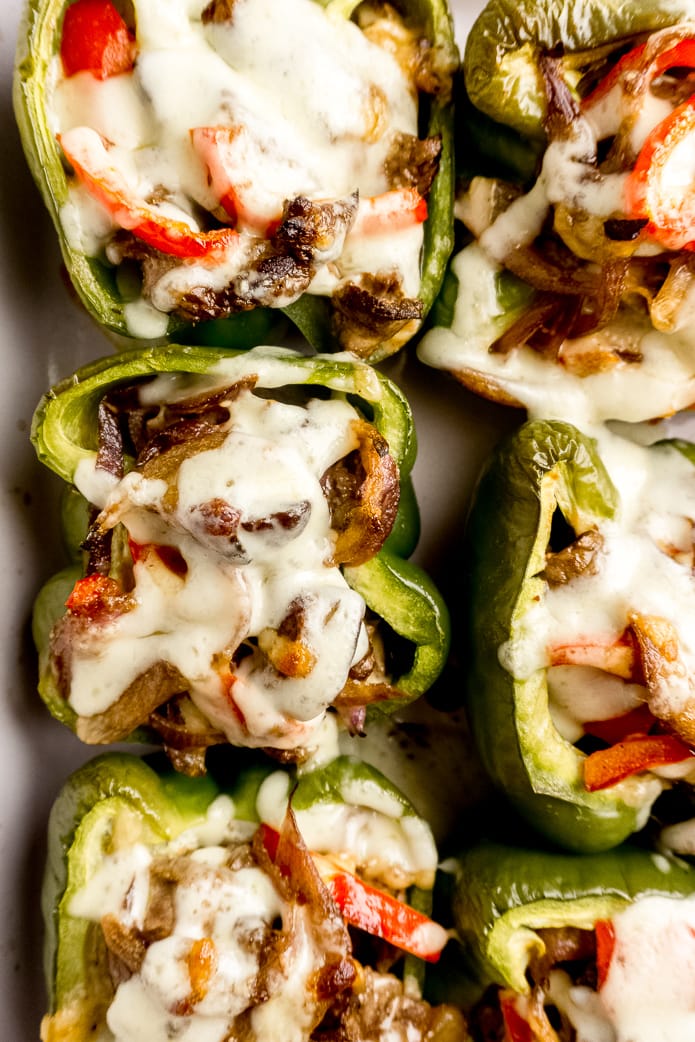 These low-carb Stuffed Peppers have all the same great flavor of a classic Philly Cheesesteak Sandwich, transformed into a healthy keto dinner dish.

One thing I love about this recipe is that it’s relatively easy to make. There’s a little bit of prep work to do in the beginning: chopping the veggies and slicing the steak.  But after that, the rest of the cooking time is hands-off baking in the oven.

You’ll be rewarded with a restaurant-quality meal that your whole family will love.  Serve these Philly cheesesteak stuffed peppers with some Easy Keto Cheese Garlic Bread or some tasty Creamy Keto Mashed Cauliflower.

And, if you’re looking for a more traditional stuffed peppers recipe, check out Keto Stuffed Peppers Without Rice [Video]. 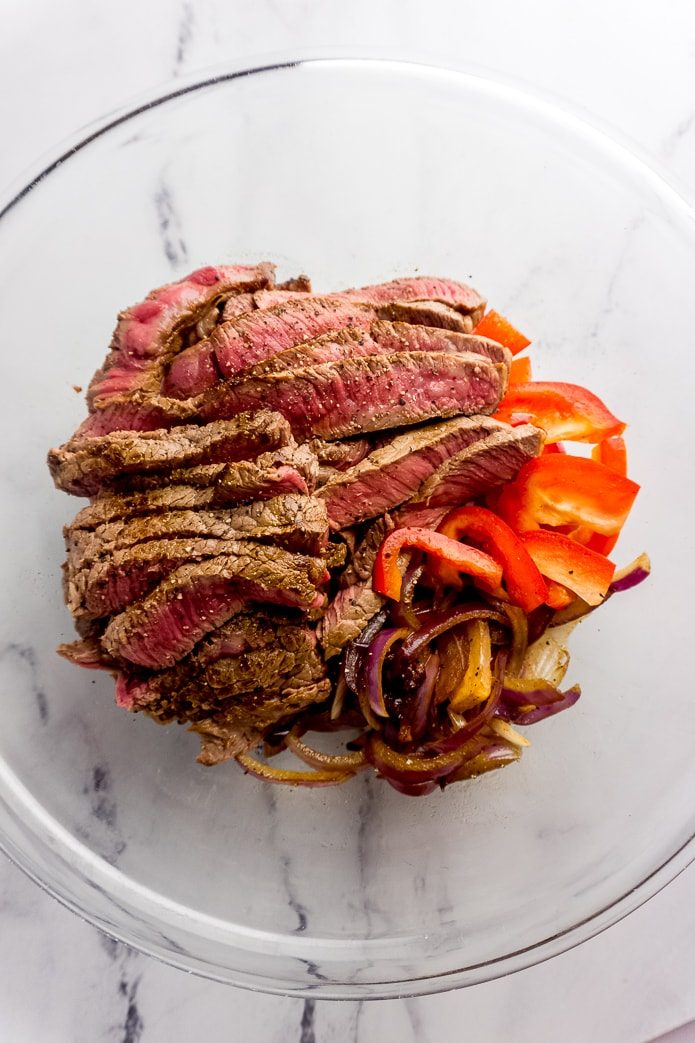 This recipe for keto cheesesteak stuffed peppers takes its inspiration from traditional Philly cheesesteak sandwiches.  It starts off with thin slices of beef, layers of melty cheese, and sautee vegetables like onions, mushrooms, and bell peppers.  You’ll need:

What’s in a Philly Cheesesteak Sandwich?

A cheesesteak — also known as a Philadelphia cheesesteak or a Philly cheesesteak — is a sandwich made from thinly sliced pieces of beefsteak and melted cheese in a long hoagie roll.  As far as the cheese itself, American cheese, Cheez Whiz, and provolone are the most commonly used cheeses.

What steak to use for Philly Cheesesteak?

For a traditional cheesesteak, the meat is usually thinly sliced rib-eye, sirloin, or top round, although other cuts of beef are also used. This recipe uses top sirloin — but just choose whatever looks the best at your market.  And if you really want to make it easy, you can even substitute ground beef to make these stuffed peppers. 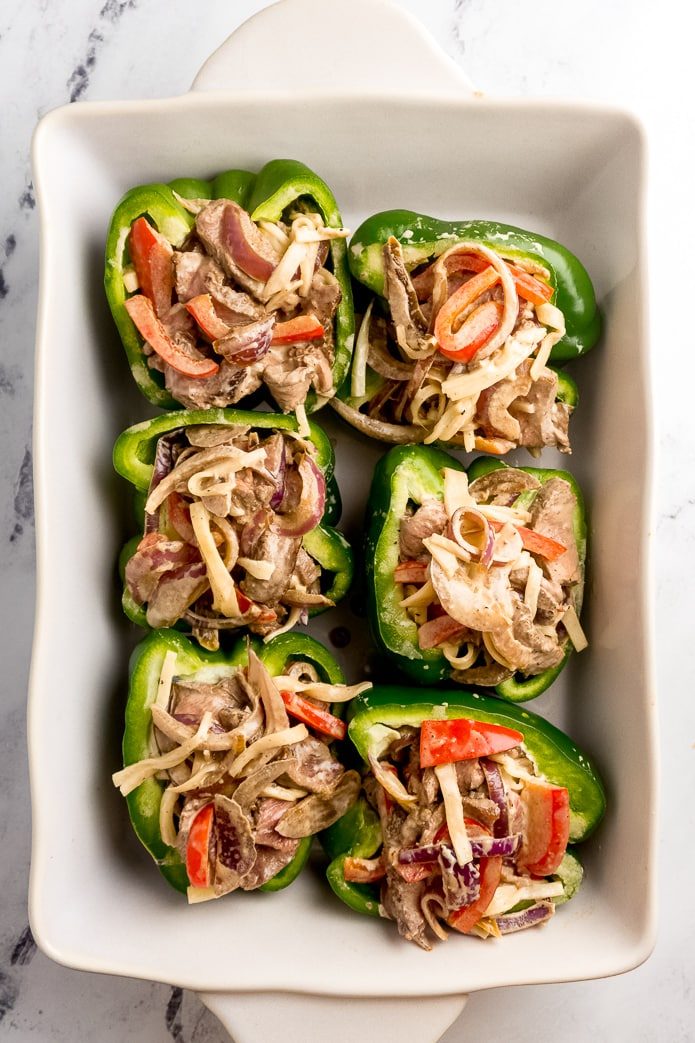 What I love about this recipe is that it’s great for make-ahead dinners.  Sure, there are a few pre-cook steps — like searing the meat and chopping the veggies. But a lot of the cooking time is done in the oven.

It’s easy to make ahead of time, too. You can either prep the whole dish ahead of time and bake when ready, or you can cook the stuffed peppers from start to finish and refrigerate them for meal prep dinners or packed lunches.

To get started, prep your bell peppers but cutting then in half and seeding them. You can use any color bell pepper you like, I went with a combo of green and red — the red, orange and yellow peppers tend to be sweeter than the standard green bell peppers. I also like to bake my peppers to soften them up a bit before I stuff them. You can pop them in the oven with a covering of aluminum foil to help them steam a bit.

While the peppers are softening, I prepare the filling: sliced steak, mushrooms, onions, and peppers. First, I sear the steak well on both sides to develop a flavorful crust.  While the steak rests, I saute the sliced veggies.  After the steak rests, I slice it as thin as possible against the grain.  A sharp knife comes in really handy here!

Then, all that’s left to do is stuff the peppers with the filling, top with cheese, and bake it all together. 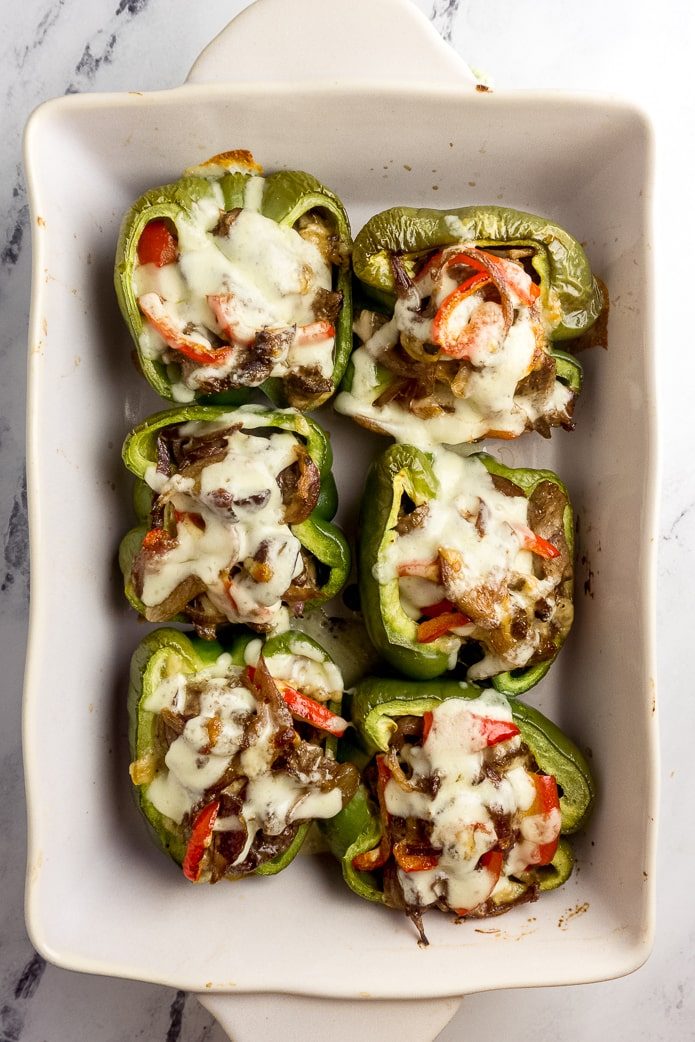 What to Serve with Philly Cheesesteak Stuffed Peppers

These keto stuffed peppers are like a little meal all by themselves.  For side dishes, I usually keep things pretty simple.  A nice green salad is nice, as is some easy cauliflower rice.

You can also serve these Philly cheesesteak stuffed peppers with some Easy Keto Cheese Garlic Bread or some tasty Creamy Keto Mashed Cauliflower.

Also, check out Keto Shepherd’s Pie with Cauliflower Mash made with ground beef and cauliflower topping, The Best Keto Meatballs which are made without breadcrumbs, or this ultimate list of 23 Easy Keto Ground Beef Recipes. 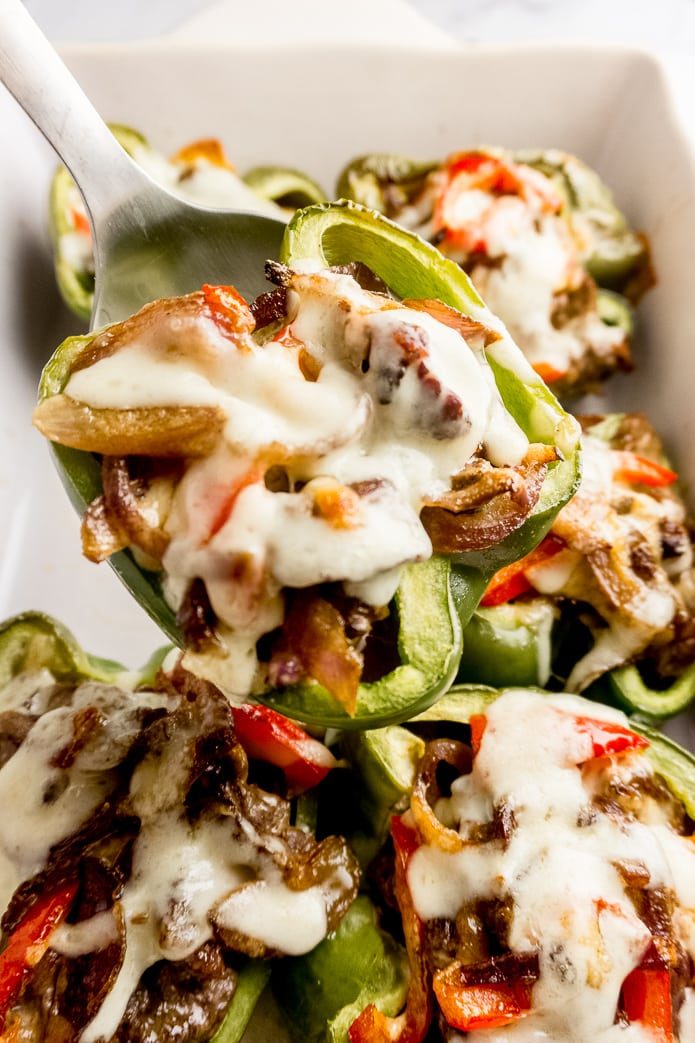 Pin this post to your Keto Recipes board on Pinterest so that you can come back and find it later! 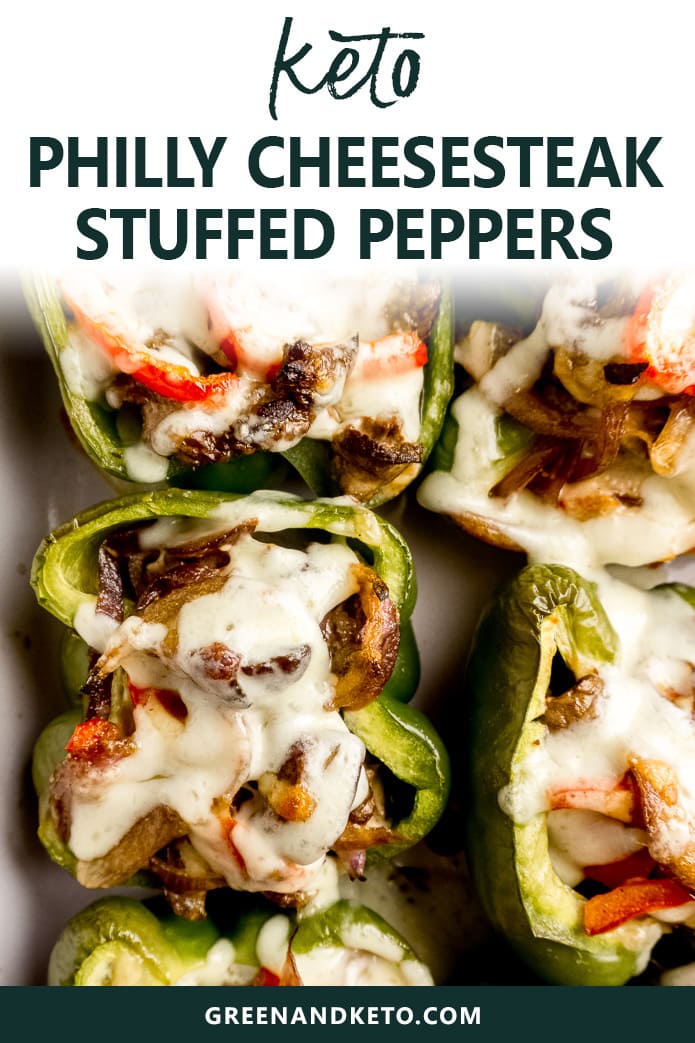