French toast is one of those breakfasts that bring back childhood memories. It’s so delicious, sweet, and filling!  Even though french toast is heavenly, it’s traditionally loaded with sugar and carbs. However, in this recipe, we’ve saved all of the enjoyable flavors but kicked the carbs and sugar.

To make keto french toast, you’re going to need keto bread which can be found at most grocery stores. 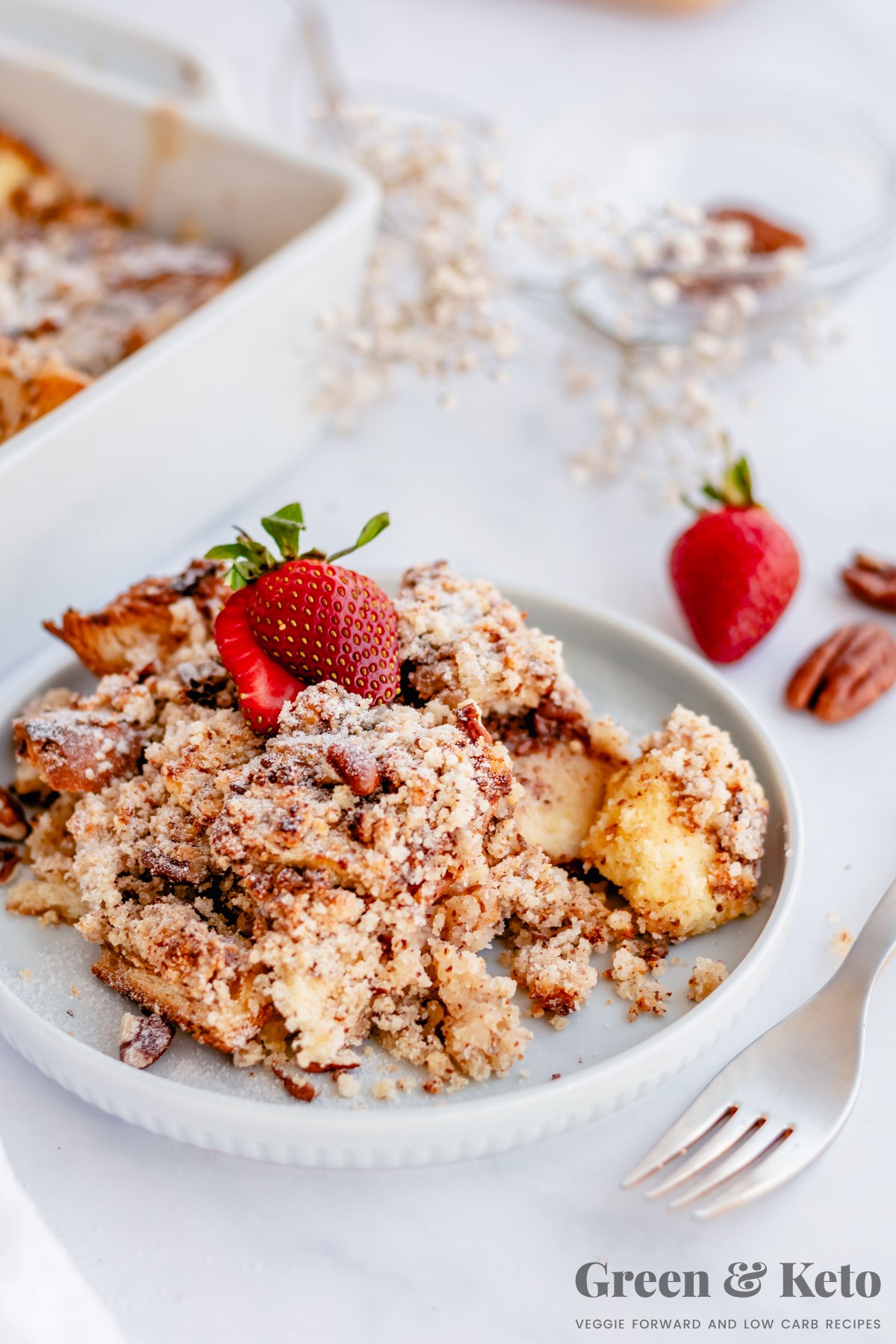 This recipe is a bit different than normal french toast recipes in the sense that your bread will be baked with a crumble topping. Almost resulting in a french toast casserole.

Baking your french toast is an easy and effective way to make multiple servings. This recipe takes a total of 45 minutes to prepare and makes eight servings. 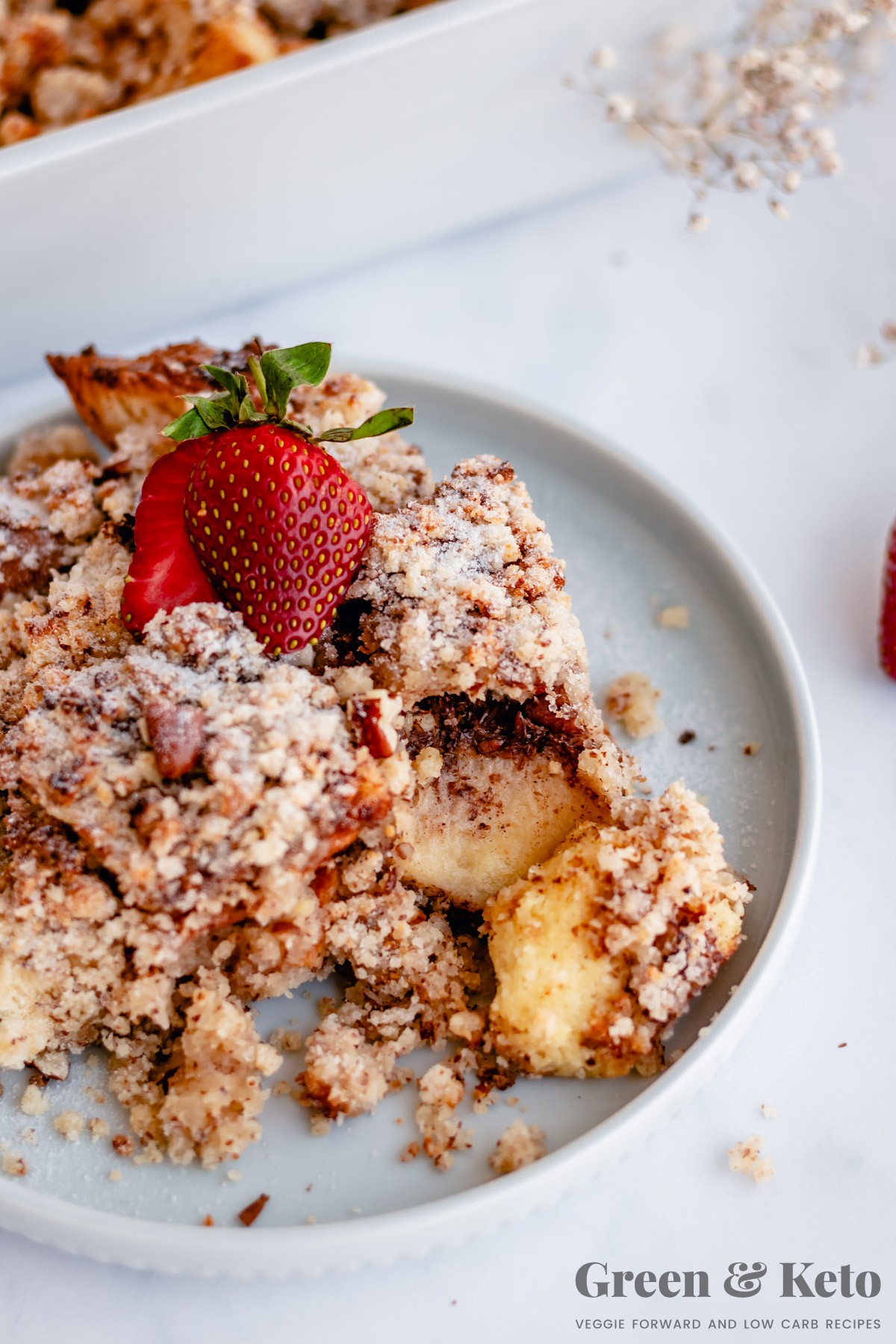 How to prepare Keto French Toast:

The ingredients you’re going to need for the crumb topping: 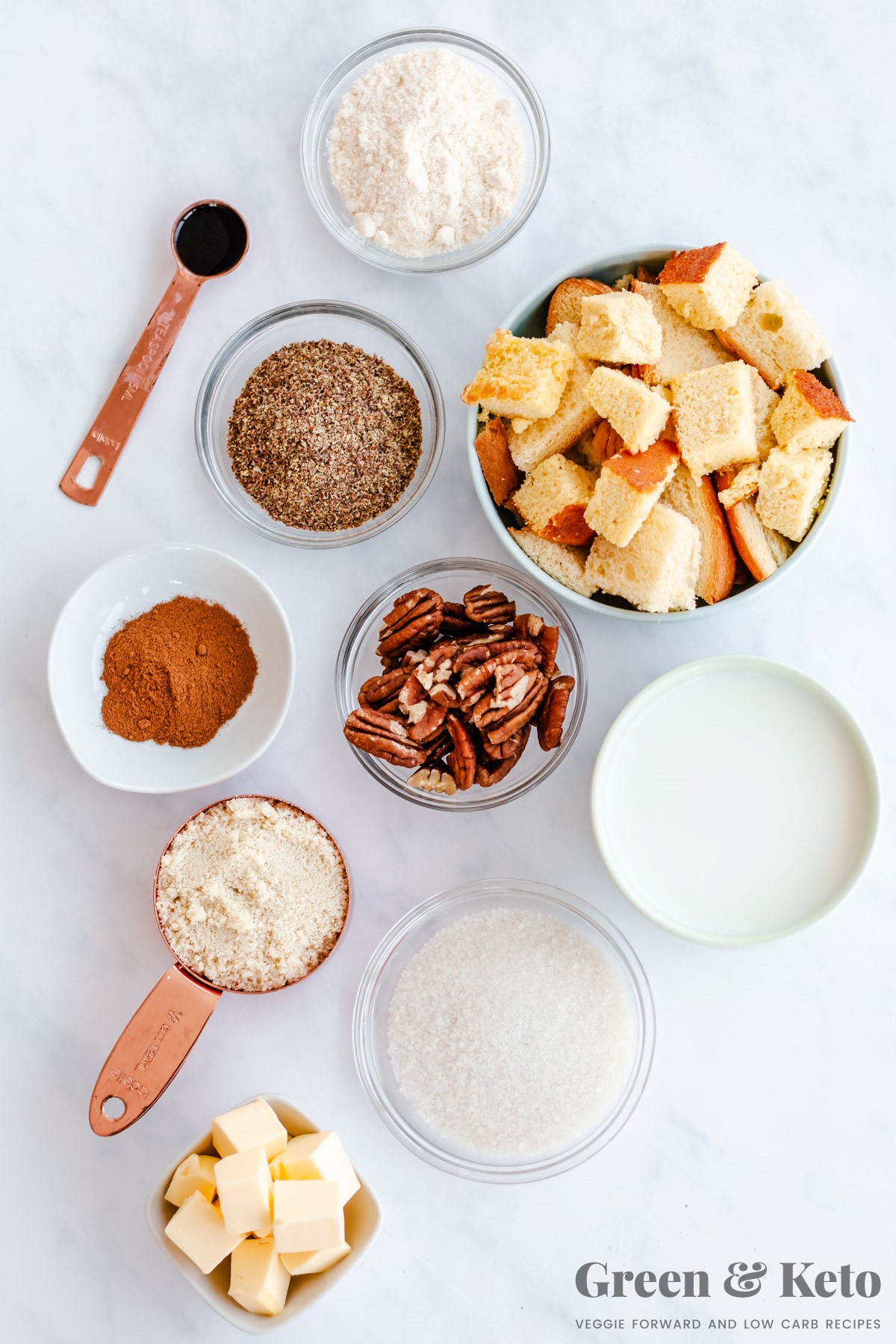 Steps for how to prepare Keto French Toast:

Preheat the oven to 450ºF. Grease a baking dish. Start by cubing your bread into equal-sized pieces.

In a large mixing bowl combine all of your french toast ingredients and whisk to combine. Let the mixture sit for 10 minutes or so to thicken. 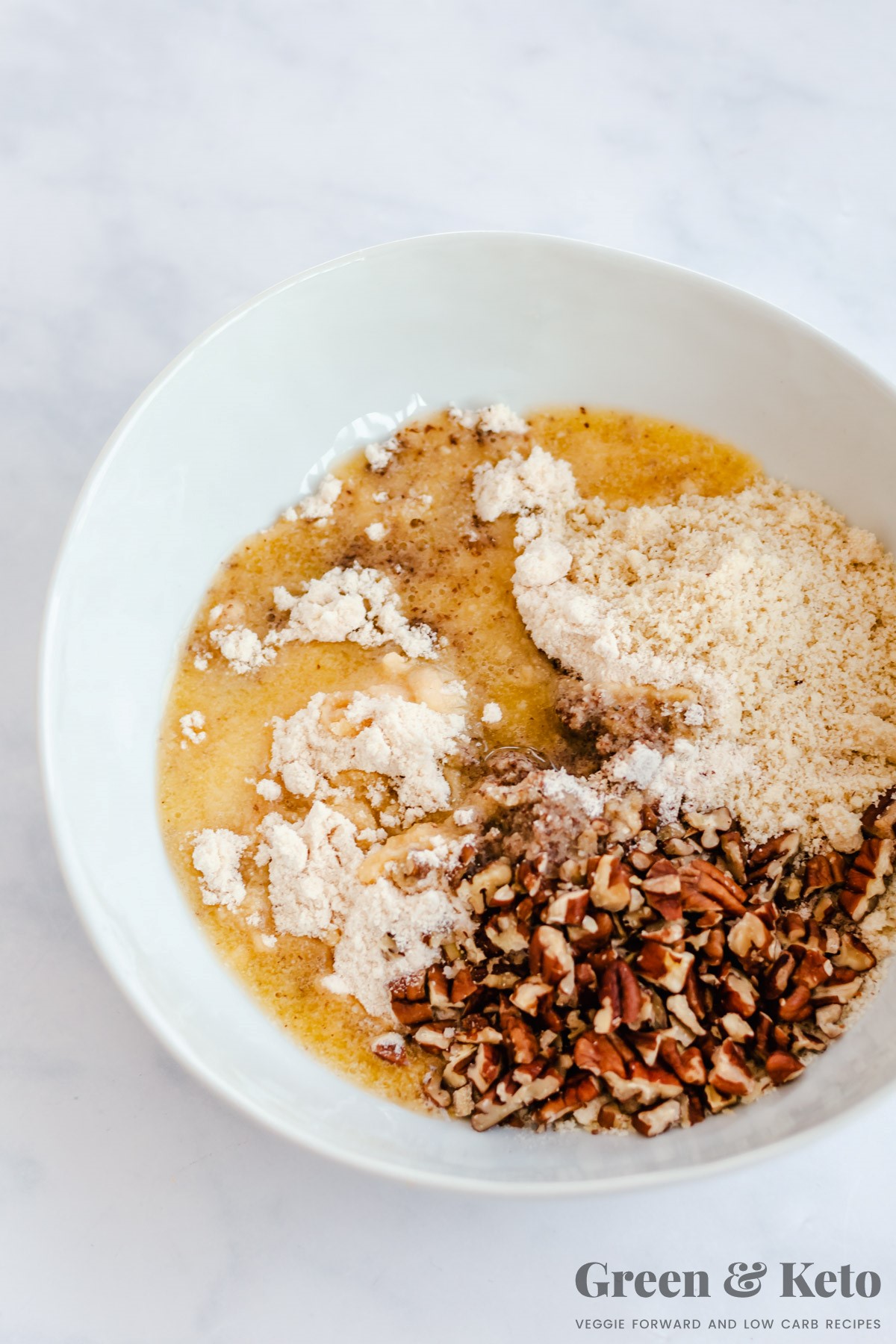 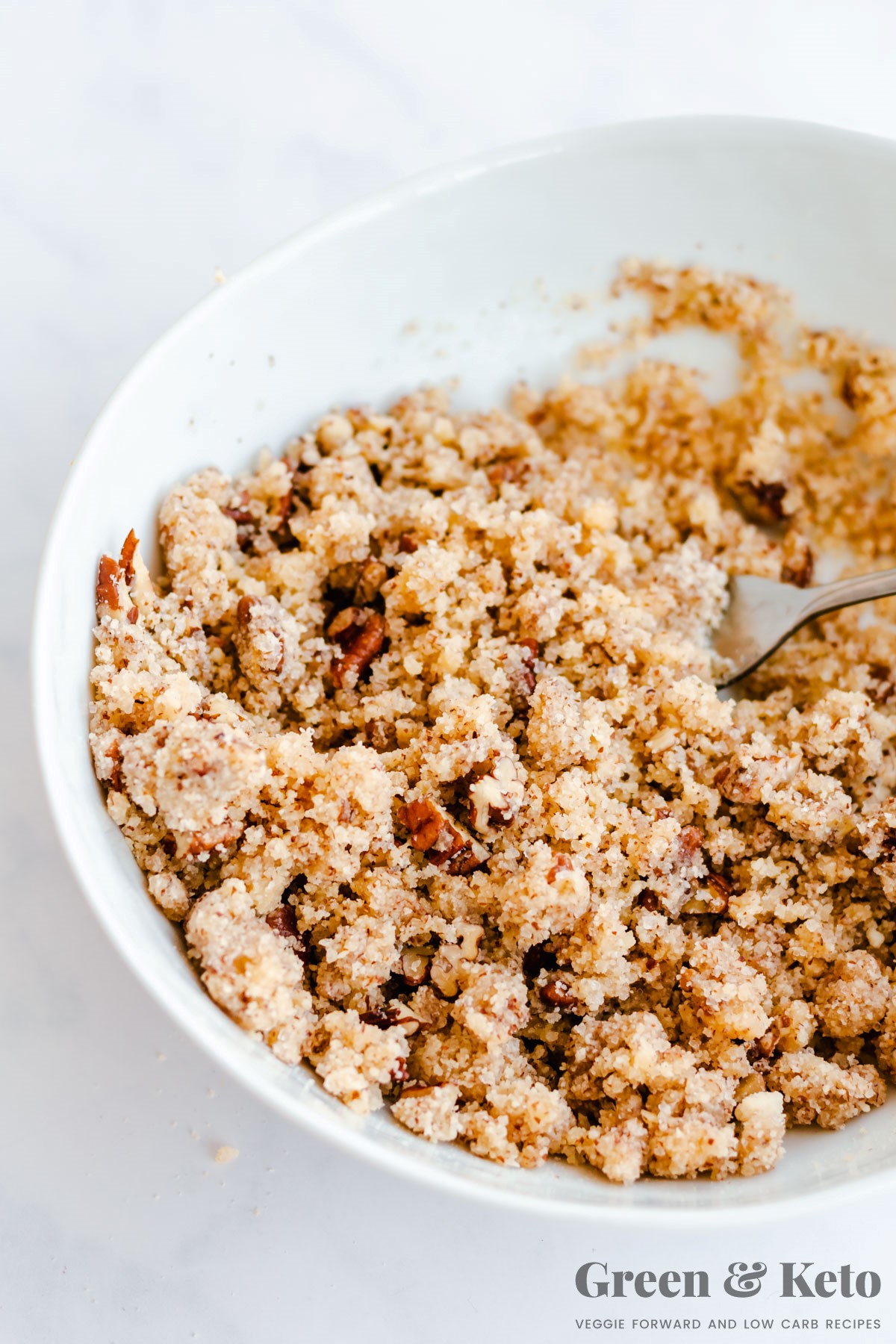 Cover the previously greased baking dish with the cubed bread and pour the milk mixture over the top. Let sit for 20 minutes, for the bread to start soaking it up. Then sprinkle the crumb topping over it and bake it for 30-40 minutes, until golden brown on top. 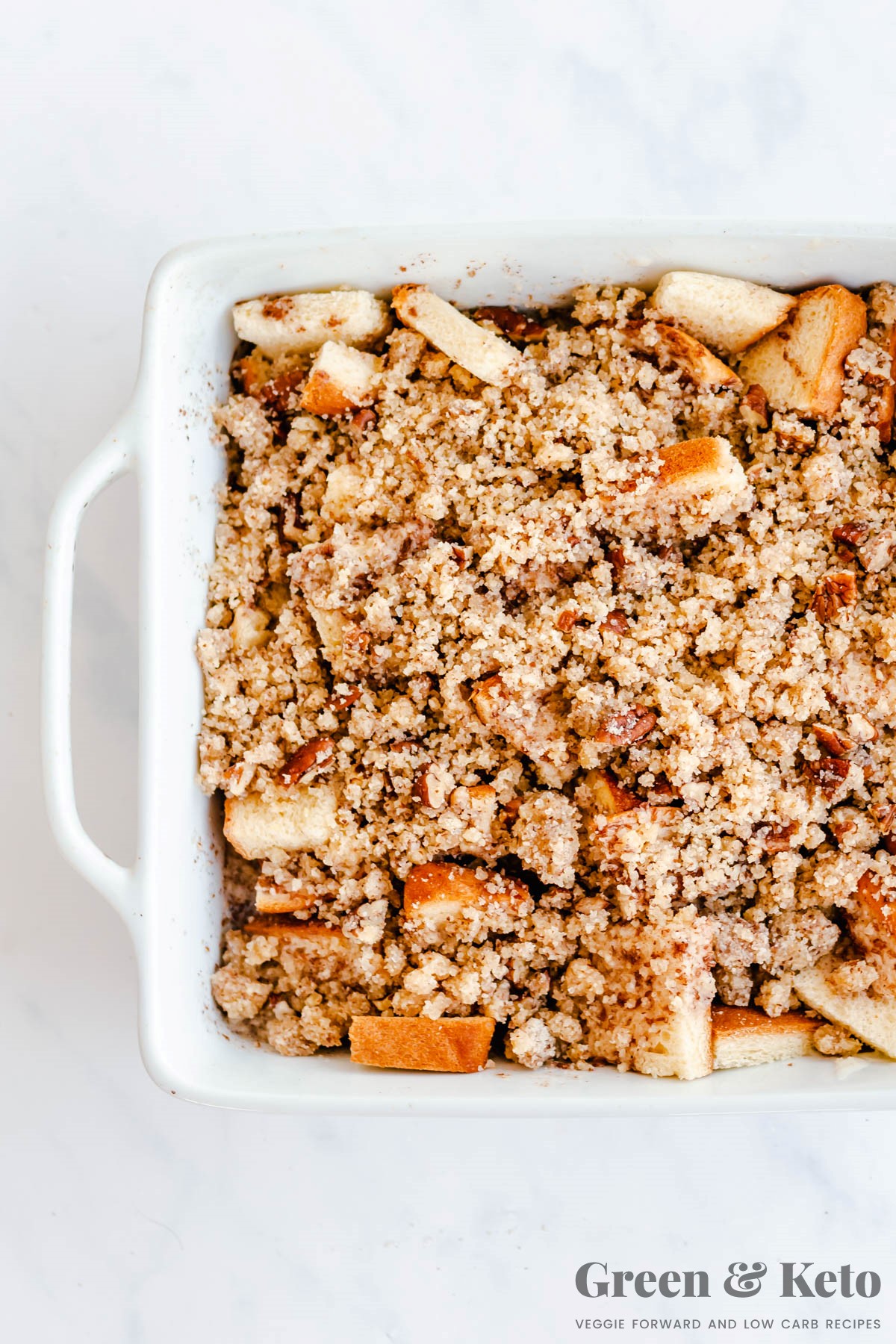 Remove from the oven and allow it to cool in the dish for 10 minutes, before serving. 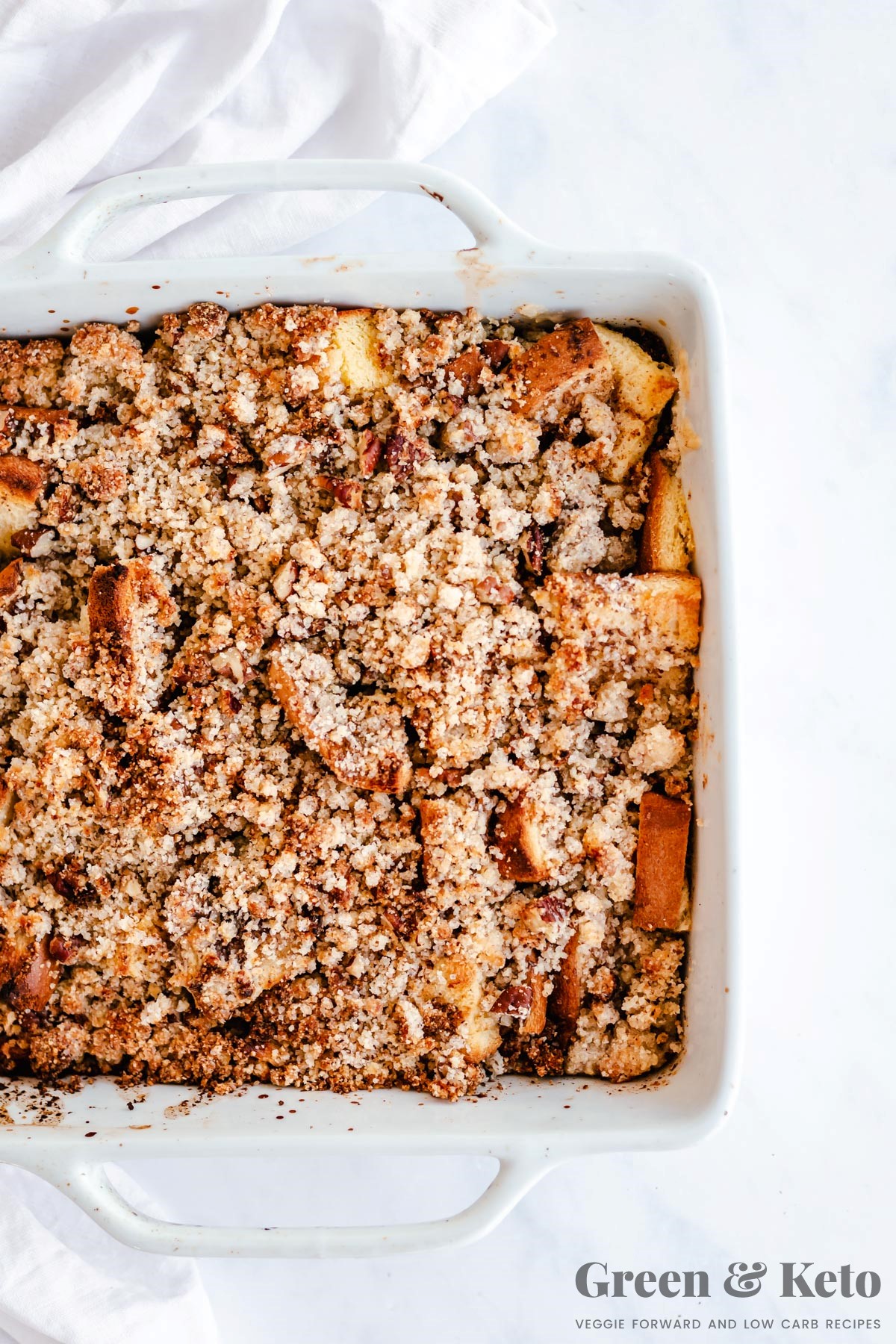 Serve warm with some chopped berries and a dollop of cream. Enjoy! 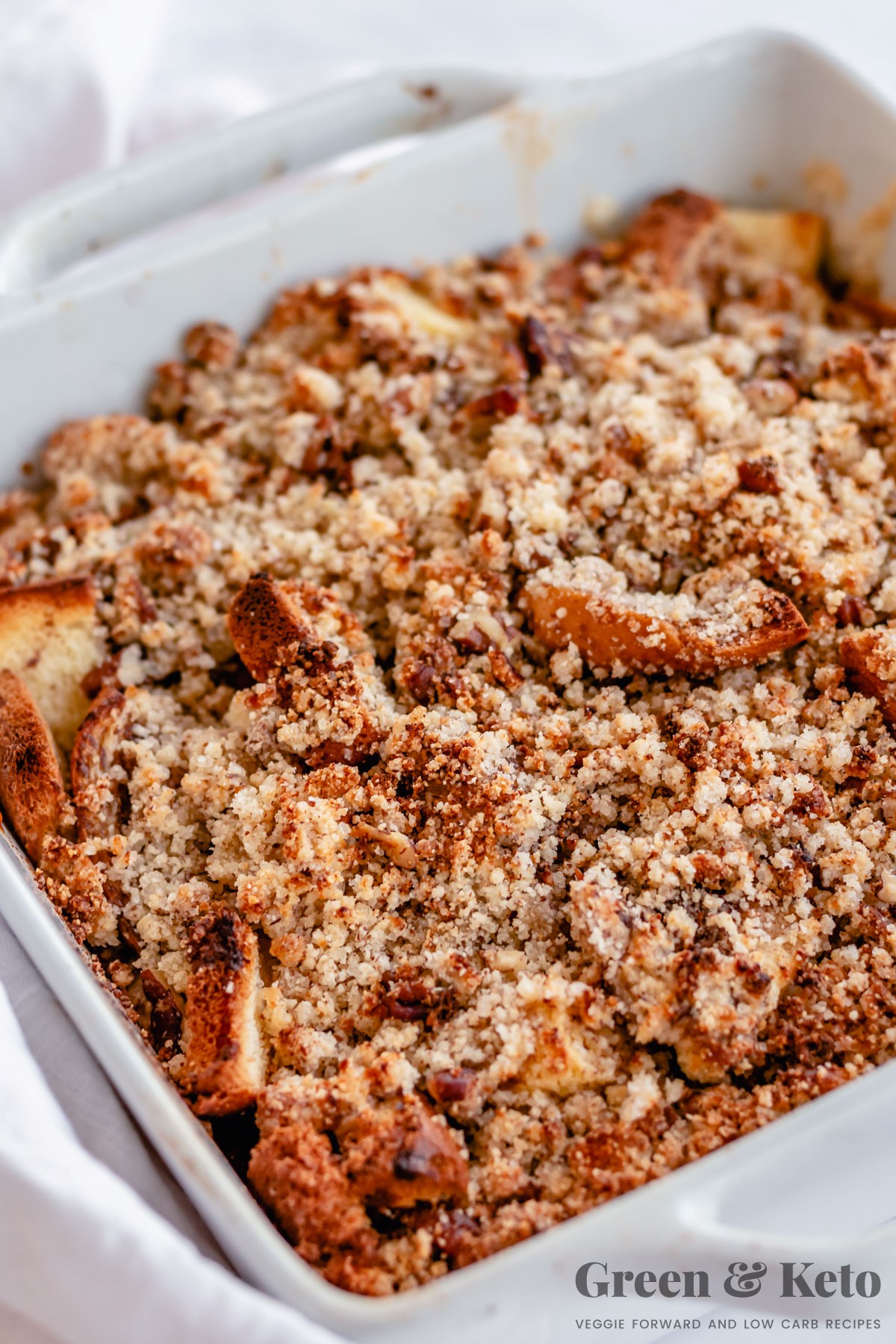 Top with maple syrup – Sugar-free maple syrup is a great low-calorie and low-sugar topping. It tastes great on recipes like this one. 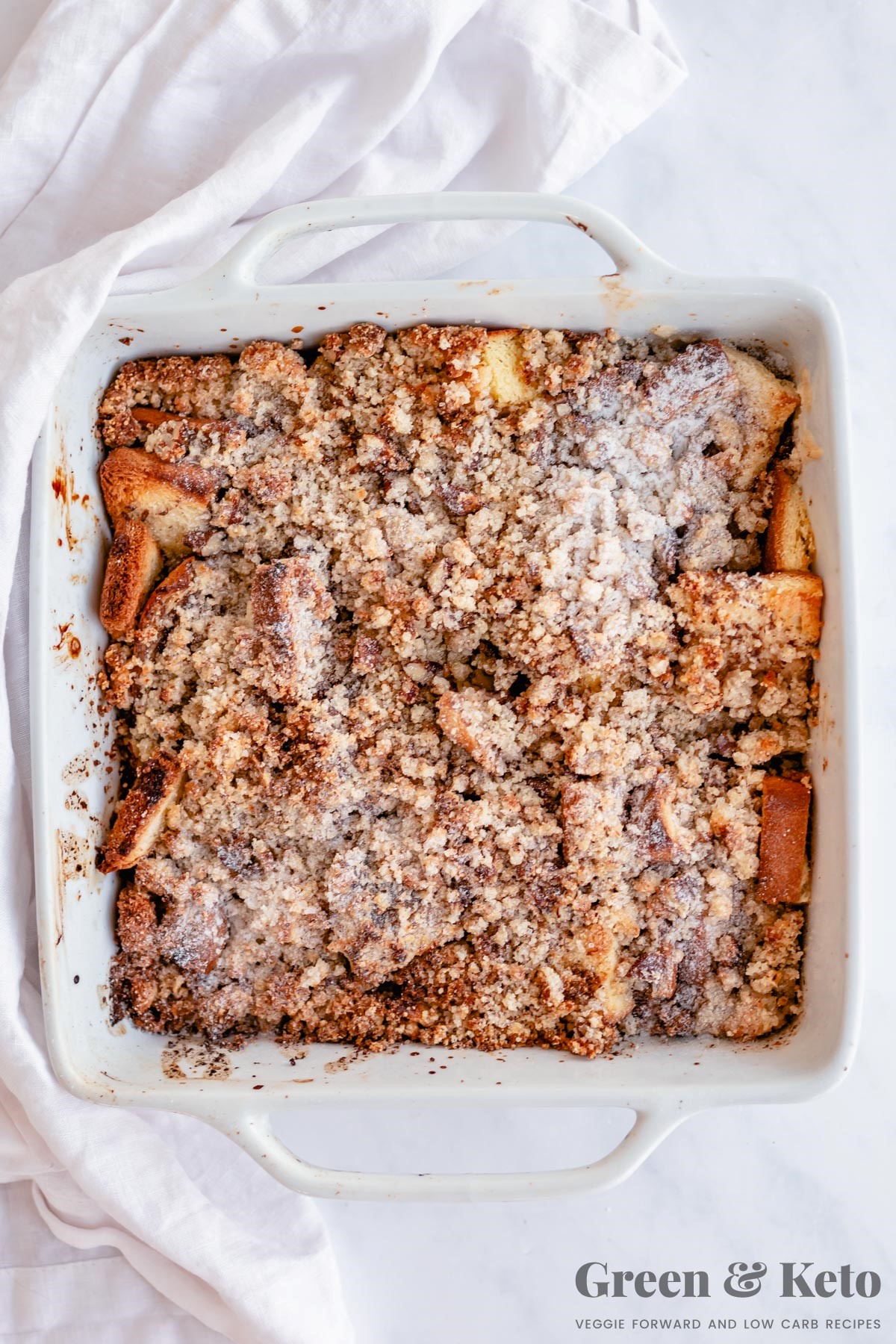 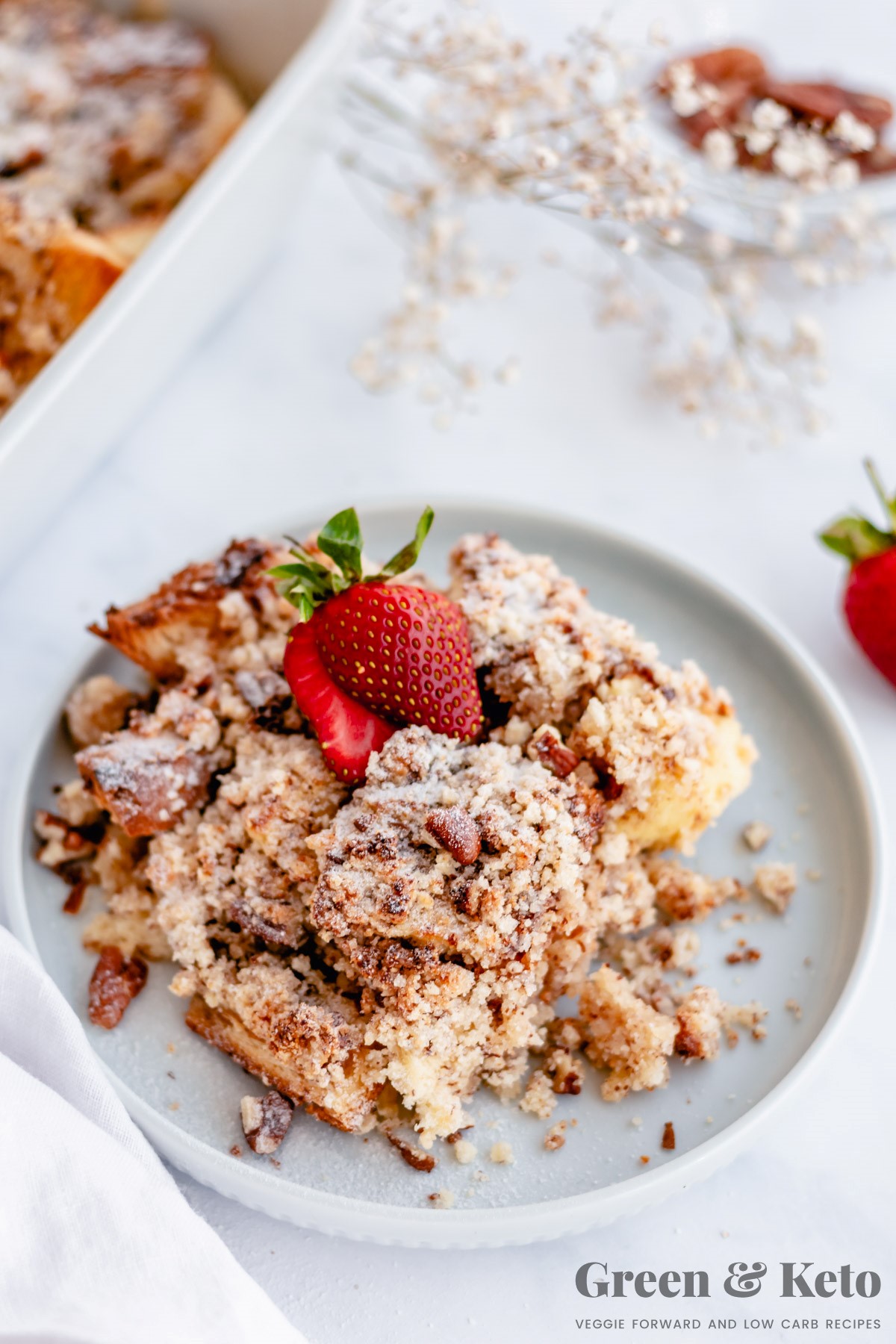 Add blueberries – Adding frozen or fresh blueberries will turn this recipe into a blueberry french toast crumble. Simply add frozen blueberries into the batter before baking.

Chocolate Chips – Everyone loves chocolate chips in their pancakes and this recipe is very similar. If you would like chocolate chips, simply sprinkle them on top of your french toast before baking. 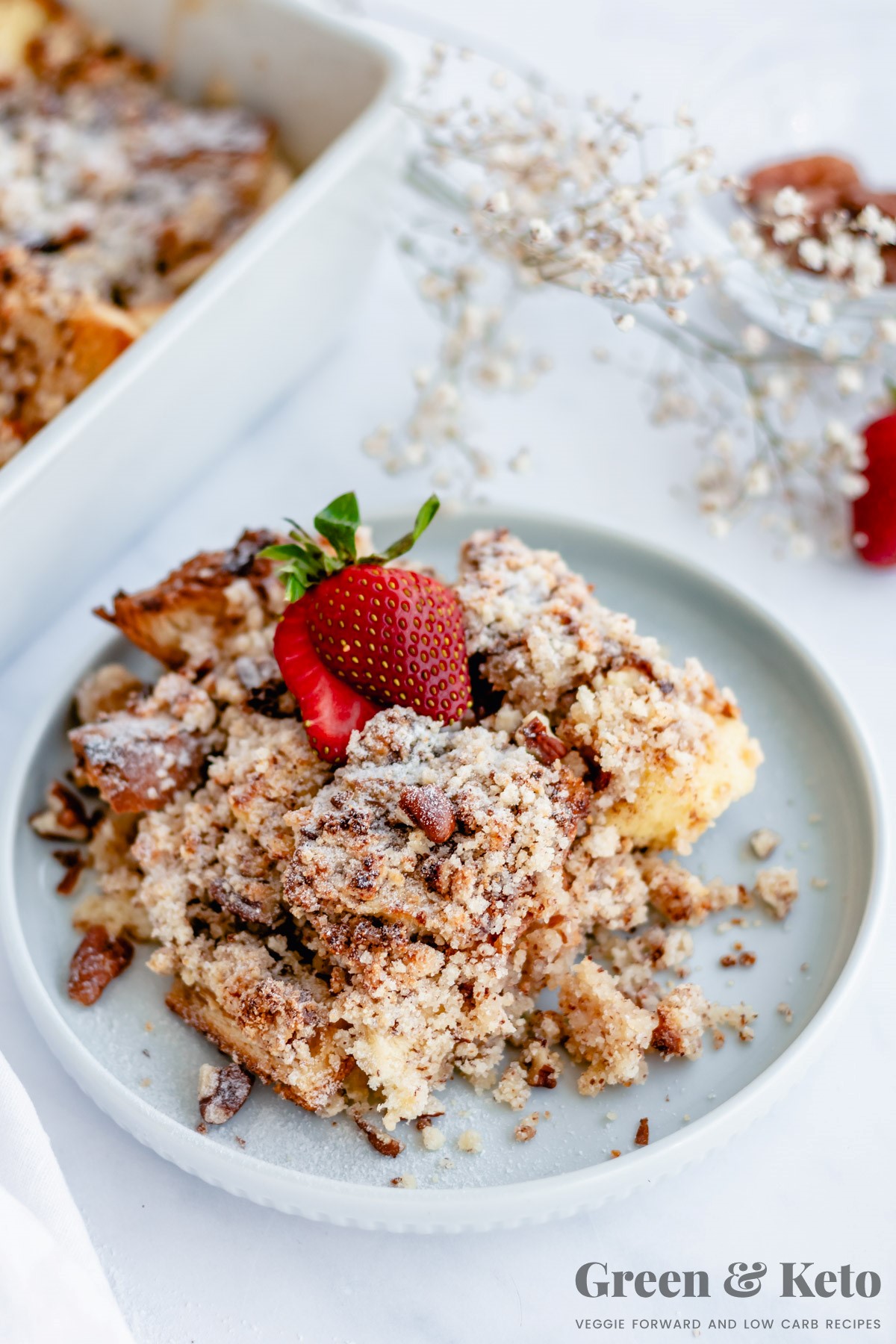 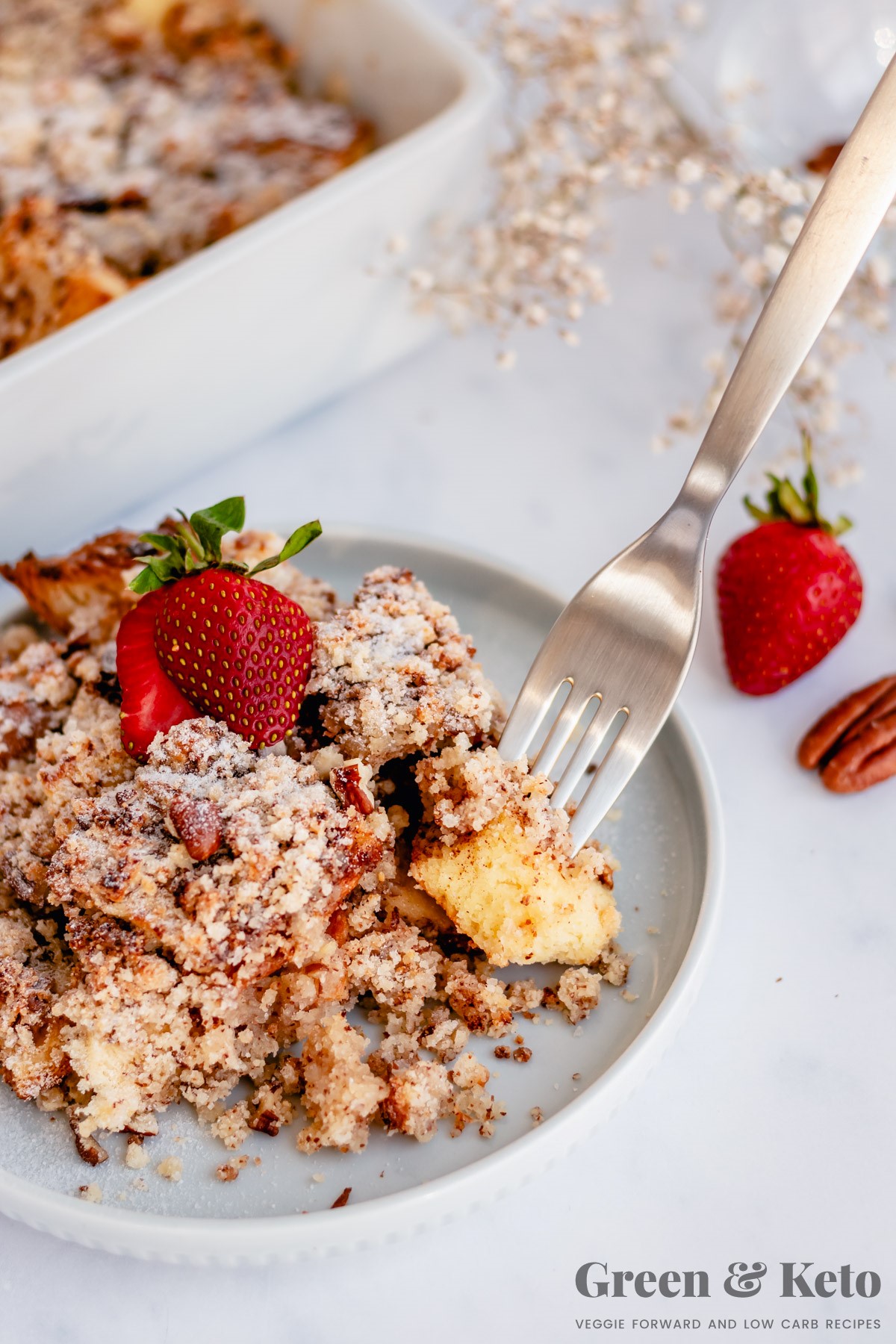 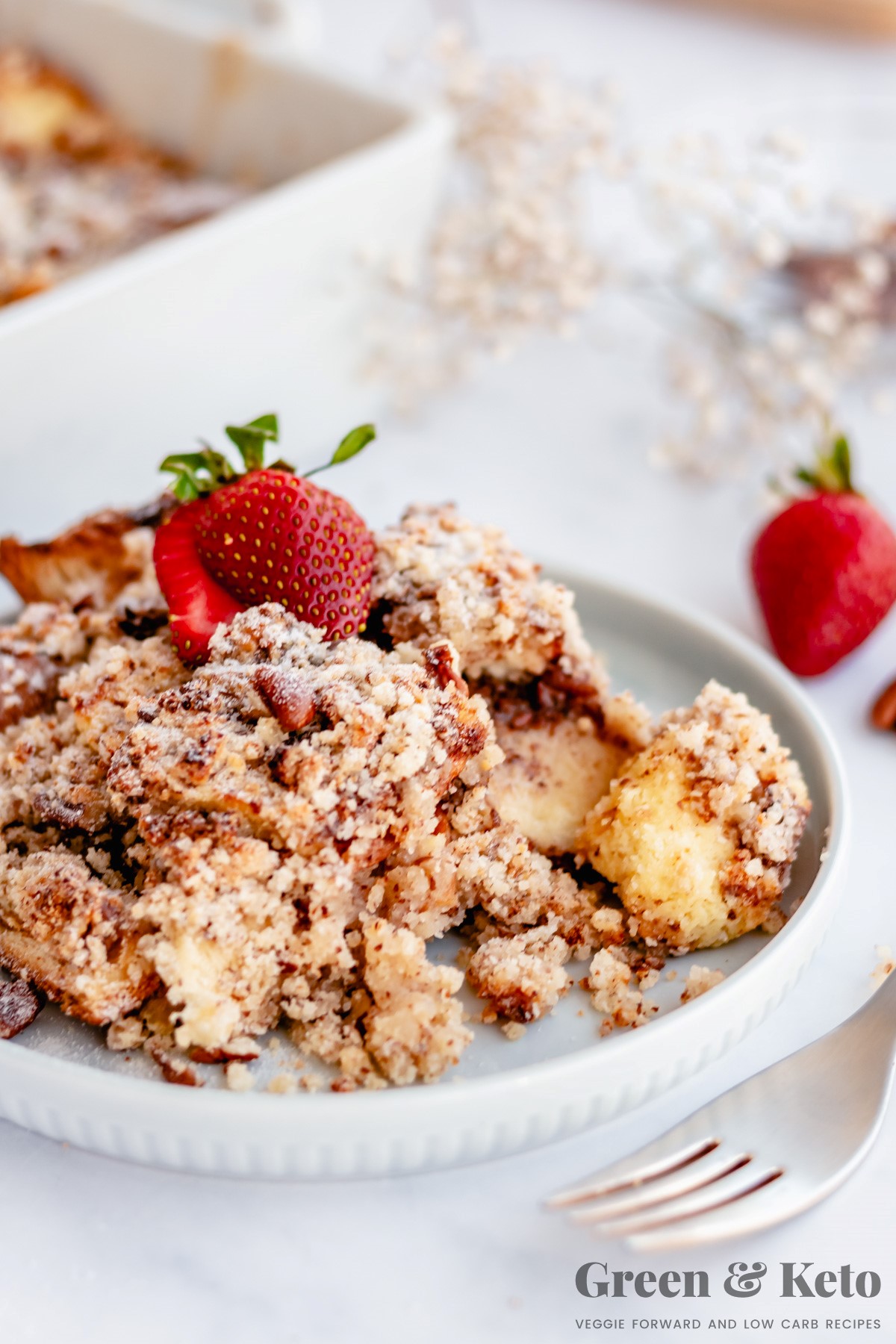 Ingredients for the french toast:

Ingredients for the crumb topping:

The nutrition information shown is an estimate provided by an online nutrition calculator. Carb count will vary with different ingredients and brands. It should not be considered as a substitute for a professional nutritionist’s advice. 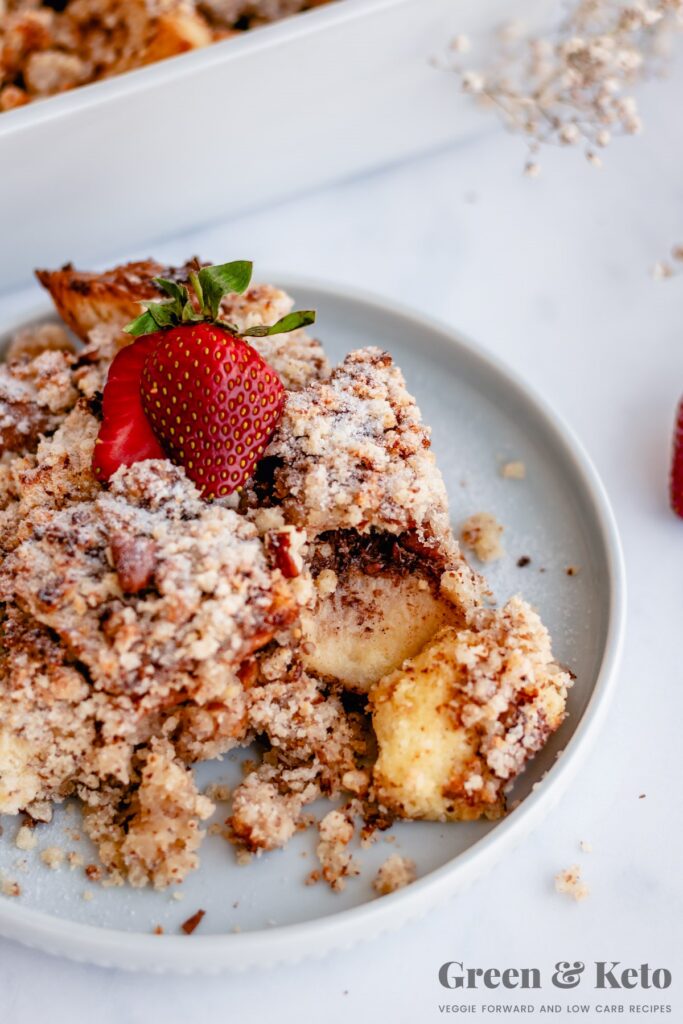