Discover the best creamed spinach recipe ideas for keto if want to include a healthy, balanced meal into your keto lifestyle – from bacon and mushrooms to red peppers and curry. 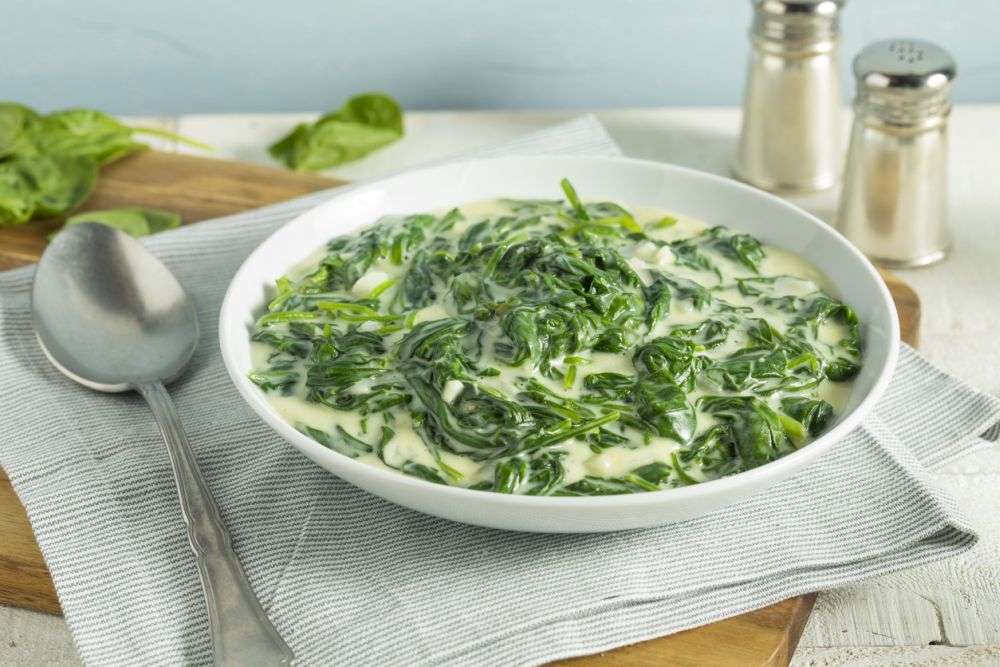 Creamed spinach is packed with nutrients and flavor, and it’s also incredibly easy to make. You only need a few simple ingredients, and the whole dish comes together in just a few minutes. Plus, it’s versatile enough to be a side dish or a main course, depending on your mood.

So if you’re looking for a delicious and nutritious spinach recipe that’s perfect for the keto diet, look no further than this list of 10 amazing creamed spinach recipes!

Here are our top picks when it comes to creamed spinach recipes for keto: 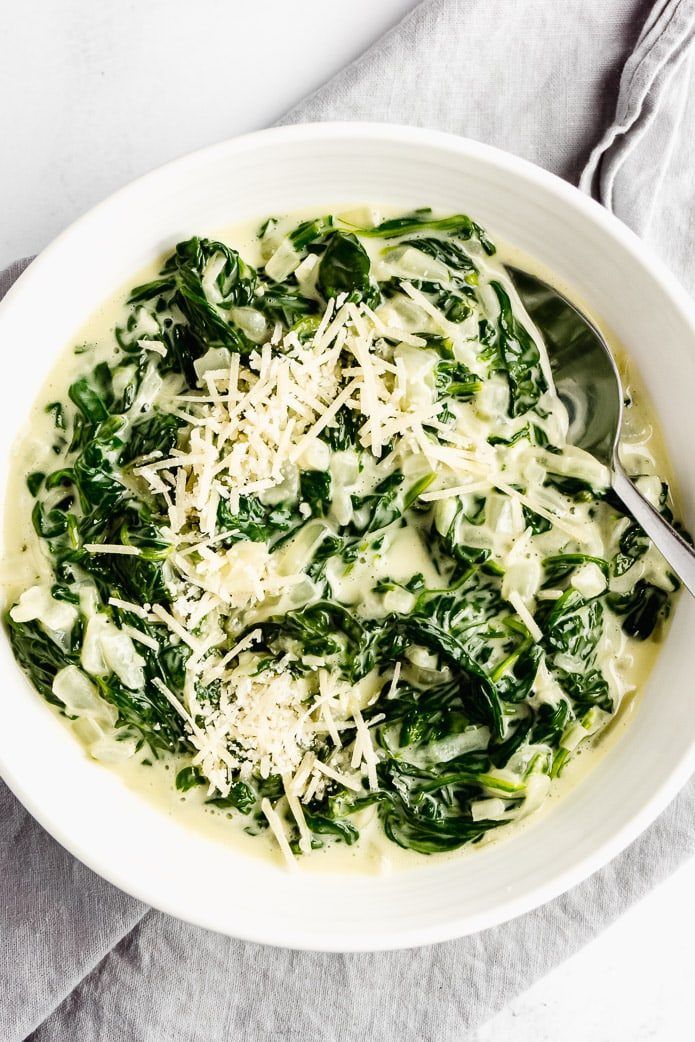 Since creamed spinach is called the way it is, we wanted the first recipe on our list to be a classic creamed spinach dish that’s easy enough for anyone to follow but delicious enough to make it worthwhile.

Also, we wanted the recipe to be keto, so we decided to go with our recipe for keto creamed spinach.

The exact selection of cheese is not very important, although we recommend that you try sticking to the mozzarella as much as possible simply because of how delicious it looks when it melts.

As for the spinach, we recommended baby spinach because it’s a lot more tender than regular spinach, but you can use regular spinach if that’s all you have. Just cook it for a bit longer, so it wilts down.

It’s perfect as both a keto main dish and a keto side dish, and we’re sure you’ll love it.

2. Best Recipe for Creamed Spinach for Those with Little Time 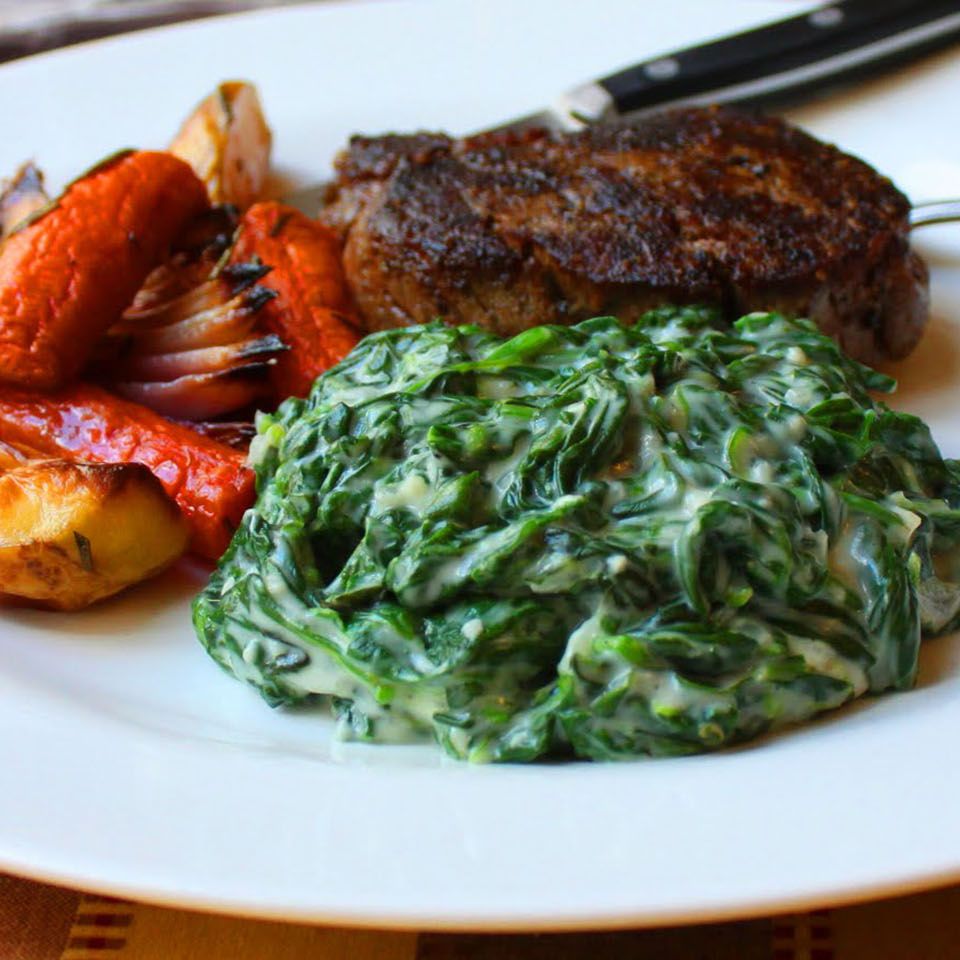 Because creamed spinach is made with so many dairy products, particularly cheeses, some may find it a bit heavy and hard to digest.

This is where this recipe from All Recipes comes in, as it’s a lighter and healthier version of creamed spinach that’s just as delicious, and the best way to describe it would be refreshing.

The lemon zest in this recipe brightens up the dish’s flavor and makes it feel fresher, while the cayenne pepper gives it a bit of a kick.

As for the Parmigiano-Reggiano, we understand that it’s harder to find and a bit more expensive, so don’t worry if you swap it out with regular grated parmesan; you’ll barely be able to tell the difference. 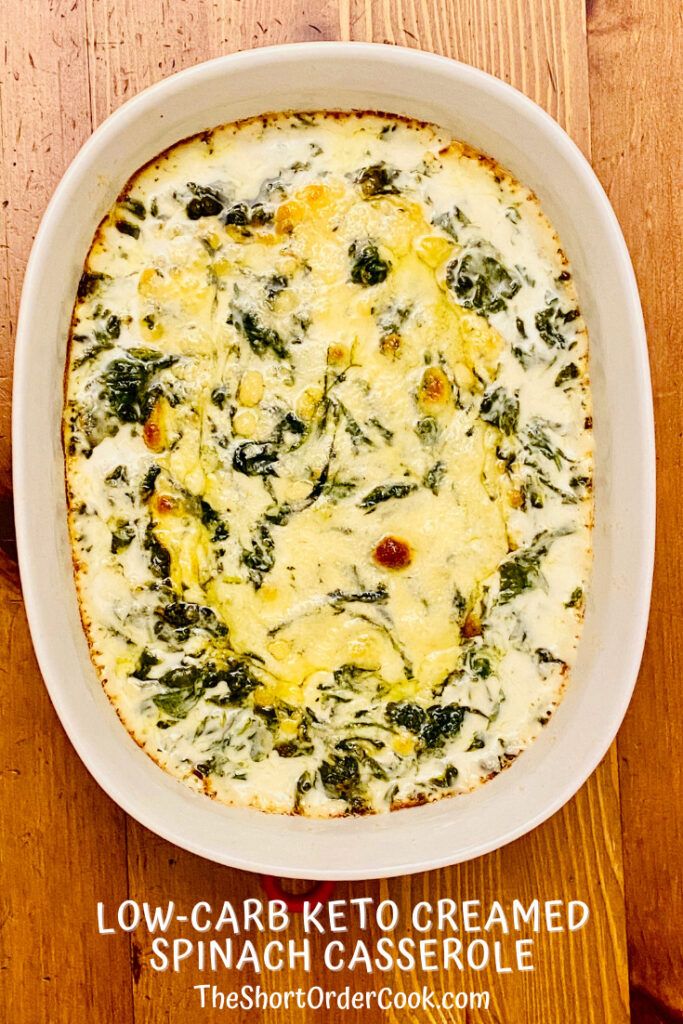 Most recipes for creamed spinach will usually require a skillet or some sort of pot, but this casserole from The Short Order Cook is baked in the oven, so it’s a bit more effortless.

Baking creamed spinach in the oven has the advantage of the dish being cooked more evenly, so you don’t have to worry about any pockets of uncooked spinach.

Besides, all the cheese on top will get all bubbly, crusty, and delicious.

Because of how this dish is prepared, it will be a lot cheesier, but it also means that you can eat it when it cools down and the cheese has hardened a bit.

Don’t worry about all the cheese and the fats that come with it; the important thing is that this dish is low in carbs, and that’s all that matters in the keto diet. 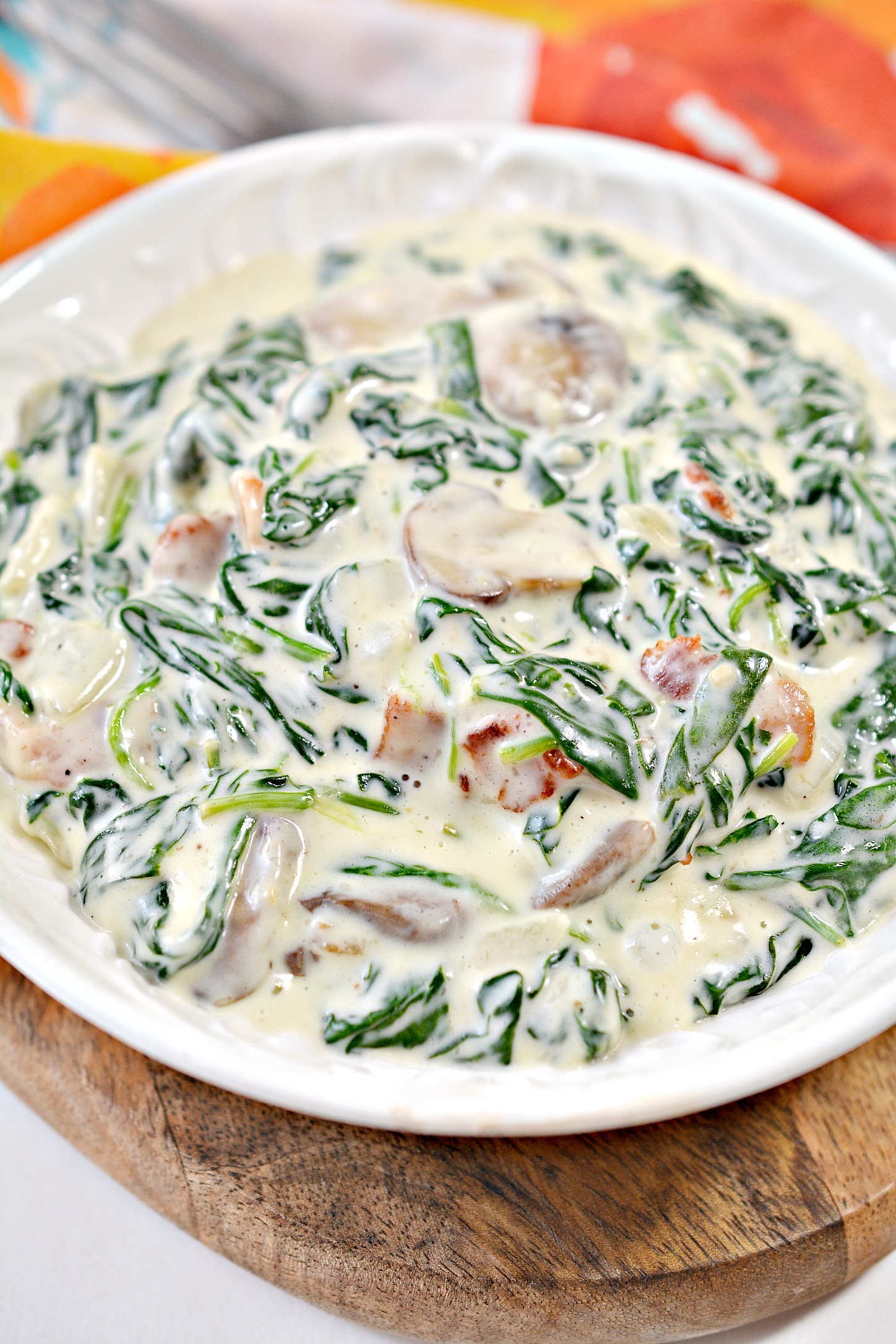 We enjoy every recipe where we get the chance to add bacon because we see it as flavor insurance.

No matter what we’re cooking, whether it’s a casserole or just a simple dish of pasta, adding bacon will almost always make it better, and this recipe for creamed spinach with bacon from Stylish Cravings is a great reminder of that.

Besides, it also has mushrooms, so what’s not to love?

While bacon is a great source of fats, people forget about protein, which is also an important macronutrient, especially in the keto diet.

Speaking of protein, mushrooms are also filled with it, and they make a great addition to this dish because they help add bulk without the carbs, especially since they’re mostly water and fiber. 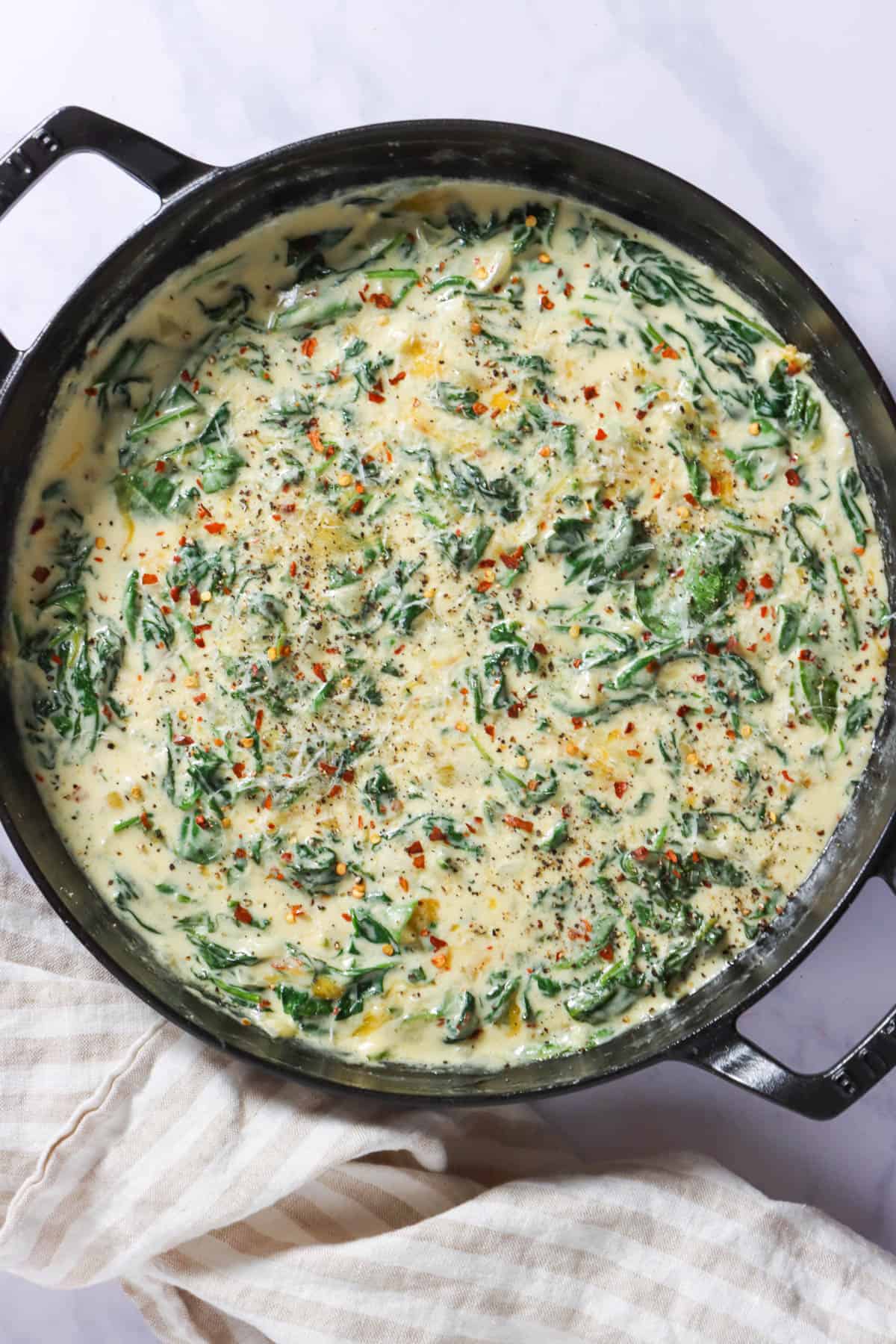 So you have a taste for spicy foods, and you were wondering how you could translate that into a creamed spinach recipe?

This recipe for creamed spinach with red peppers from Urban Farmie has got you covered since it starts like your typical creamed spinach recipe, but it contains a few extra ingredients that will set your tongue on fire. Sign us up!

Out of the 10 ingredients that are needed for this recipe, 6 of them are things that are generally used when you want to add a bit of heat to a dish, so expect this recipe to be pretty spicy.

But if you can’t handle the heat, you can always reduce the number of red pepper flakes or leave them out altogether.

6. Cream of Spinach Recipe with Curry 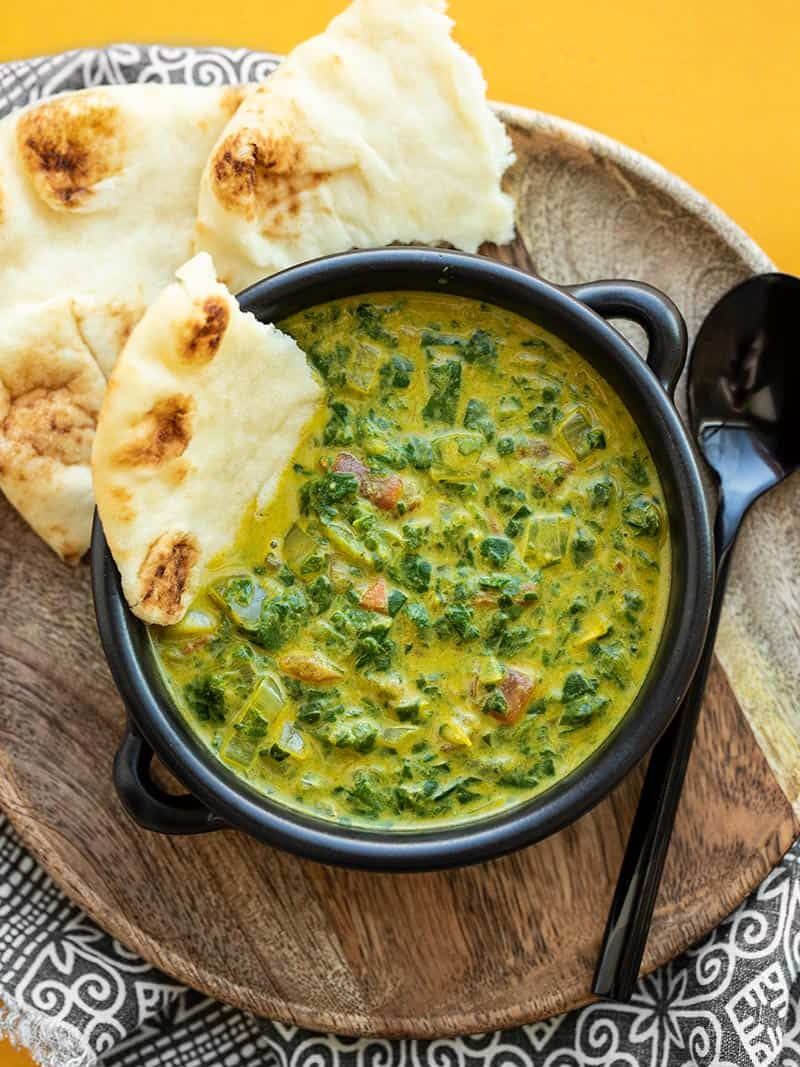 This recipe from Budget Bytes takes a dive into Indian cuisine while staying true to the keto diet. And it only requires a few simple ingredients that you might already have in your kitchen.

Unlike the recipe from the previous section, this one doesn’t try to be overly spicy as it tries to be flavorful. And that’s not bad, because sometimes you just want to enjoy the taste of your food without feeling like your mouth’s about to explode.

We recommend playing with the spices required for this recipe, especially turmeric, cayenne pepper, garam masala, and ginger, to find the perfect balance that suits your taste buds. 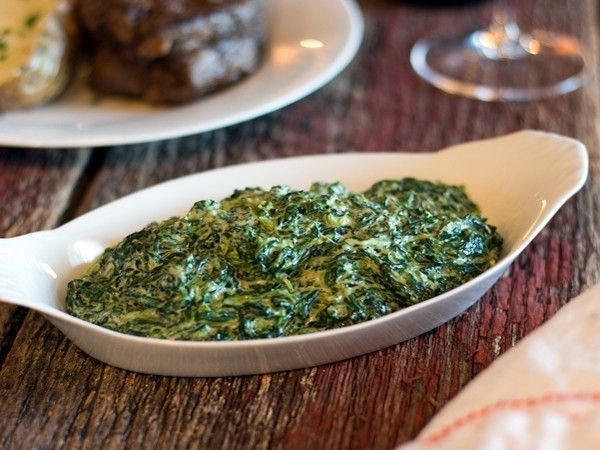 Ruth’s Chris Steak House is one of the most popular steak restaurants in the US. While steaks are their specialty, the restaurant is also known for its creamed spinach, which is why we added it here.

Here’s a copycat recipe for Ruth’s Chris Steak House creamed spinach, courtesy of Top Secret Recipes. And we have to say that it’s spot on!

Ruth’s Chris Steak House may be known for their delicious dishes, but they certainly never intended to make recipes that were keto on purpose, so the all-purpose flour will have to go.

Fortunately, the flour is there to act as a thickener. You can substitute it with many other keto flour substitutes, the most popular ones being arrowroot powder or Xanthan gum.

As for what you can serve this dish with, anything made of beef will do, like a nice juicy Salisbury steak. 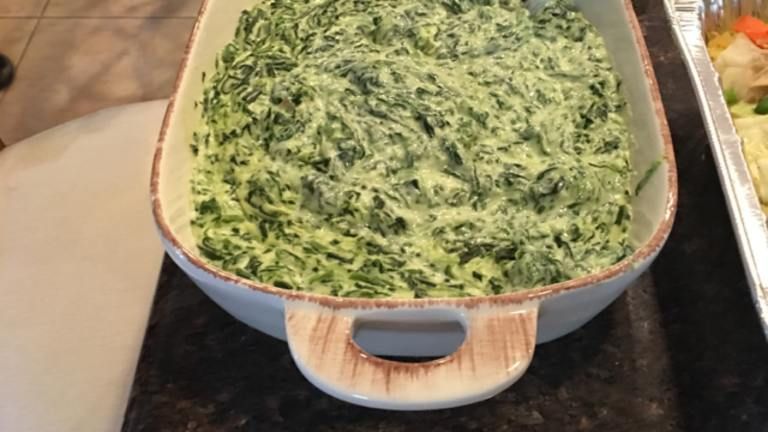 Another popular chain of restaurants known for their creamed spinach is Boston Market, and we found a copycat recipe on Food.com that’s pretty close to the real thing.

It’s so good that even though it contains a few ingredients that are not keto-friendly, we still decided to include them in this list because you can easily substitute them with keto-approved ingredients.

Unfortunately, this recipe can’t be replicated with a food processor, but if you follow the recipe to the letter, you’ll realize that all the efforts will be well worth it.

As for the flour, just replace it with something else. However, if you aren’t a fan of xanthan gum or arrowroot powder, you can replace them with almond or coconut flour. 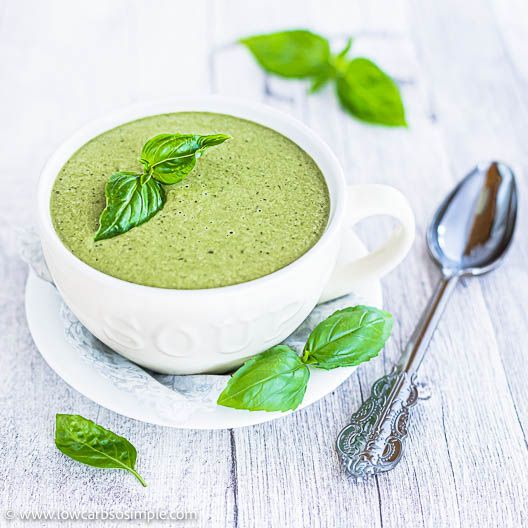 So far, all of the recipes showcased had 2 or 3 types of dairy, so we decided to switch things up a bit and include a vegan recipe for creamed spinach soup.

We found this recipe on Low Carb So Simple, and it’s not only dairy-free but also gluten-free, making it perfect for those who are lactose intolerant or have celiac disease.

Even if you’re not following the keto diet, we urge you to try it at least once simply because of the unique flavor that the hemp seeds add to the soup.

If you don’t have any hulled hemp seeds and the coconut milk added to the soup, you could also try using almond or cashew milk instead; just make sure you use a sugar-free variety.

It’s a very light soup that you can enjoy on hot summer days, and it’s perfect for both lunch and dinner or as an appetizer before you serve something heartier. 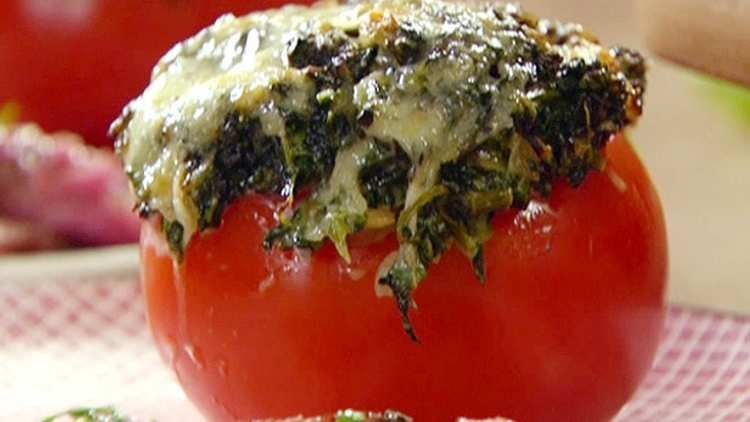 For our last entry, we wanted to try something a bit different, so instead of listing yet another recipe for creamed spinach, we decided to go with a recipe where the creamed spinach is stuffing for a much more elaborate dish.

That’s how we came across this recipe for creamed spinach stuffed tomatoes on Food Network. It looks amazing!

We recommend that you buy the biggest and meatiest tomatoes you can find, and if you want to go all out, you could even try using heirloom tomatoes.

As for the blue cheese, feel free to use any type you like, or even replace it with feta cheese if you’re not a fan of blue cheese, although feta doesn’t have that save classy vibe as blue cheese.

This is a very impressive dish that’s perfect for casual gatherings and more formal occasions, and your guests will be amazed when they cut the tomatoes in half and realize what a creamy surprise awaits within.

In the next section, find out more keto recipes that revolve around spinach.

If you love spinach, check out these awesome recipes:

The next section provides additional information about creamed spinach.

This section gives you straightforward answers to common questions about creamed spinach.

What is creamed spinach?

Creamed spinach is a dish made with cooked spinach that’s been pureed and then combined with cream, milk, and/or cheese.

Yes. Spinach is packed with nutrients like vitamins A, C, and K, folate, and iron. It’s also a good source of fiber and protein. While cream and cheese are high in fat and calories, they also contain essential vitamins and minerals like vitamin A, vitamin D, and calcium.

Is creamed spinach high in carbs?

It depends on the ingredients used. According to Nutritionix, a single serving of creamed spinach (~184 grams) contains about 4.4 grams of net carbs. This information is for creamed spinach made with spinach, butter, garlic, cream cheese, nutmeg, onions, and whole milk.

How do you thicken creamed spinach?

You can thicken creamed spinach with flour or cornstarch, cream cheese or sour cream, or cooked egg yolks.

How do I make spinach dip with cream cheese?

To make spinach dip with cream cheese, use a medium saucepan over medium heat to cook the spinach and cream until the spinach is wilted and the cream is bubbling. Then add parmesan cheese, cream cheese, nutmeg, salt, and pepper. Stir until everything is well combined, and then serve immediately.

The next and final section summarizes the entire article on keto creamed spinach recipes.

We think 10 recipes are enough to help you find the perfect way to make creamed spinach for your next meal. They are healthy and low-carb, ideal for the keto diet.

What’s your favorite keto creamed spinach recipe? Let us know in the comments below!